The Problems with
Loss of Cervical Lordosis

Orthodontists use the principle of viscoelastic creep when straightening teeth. The braces put a prolonged mechanical load on the teeth in the desired direction and the bone adapts; the alignment of the teeth in the bone changes.

In a similar manner, soft tissues (ligaments, cartilage, tendons, muscles, etc.) also undergo viscoelastic creep when prolonged loads are applied; they mechanically distort and eventually adapt to the applied loads. The classic modern example is the forward head posture and loss of cervical lordosis while viewing or working on hand-held cellular devices (2). 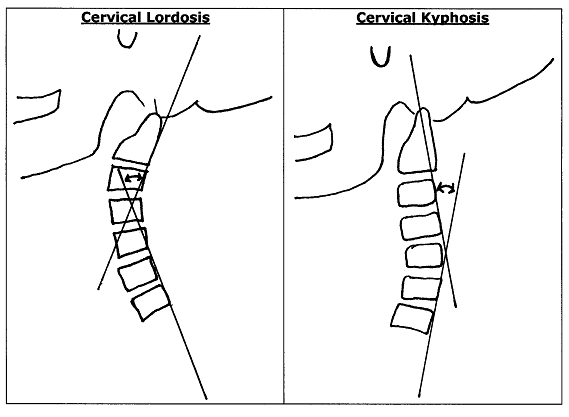 The lateral spinal curves are necessary for proper biomechanical function. The three curves strengthen the spinal column, allowing people to stand up strong in a gravity environment, yet also allowing for greater spinal ranges of motion (3).

Another notorious cause of hypolordosis is trauma. The trauma best documented to cause loss of cervical lordosis is motor vehicle collisions. This is well documented by whiplash-injury pioneer Ruth Jackson, MD, from Baylor Medical School in her 1978 book (4), The Cervical Syndrome.

In 2002, Vincenzo Giuliano, MD, and colleagues, published a study in the journal Emergency Radiology (5). Using MRI, the authors carefully evaluated the cervical spines of 100 whiplash trauma patients and compared them to 100 asymptomatic control subjects.

Loss of cervical lordosis is associated with a number of problems and clinical syndromes, including those noted below: 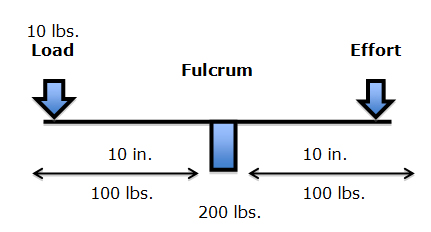 In the spine, the fulcrum of the first class lever of upright posture is primarily the vertebral body/disc, and the two facet joints. Pertaining to the head/neck complex, the load is the weight of the head multiplied by the distance between the center of mass of the head and the fulcrum. The effort is the amount of force generated by the contracting muscles on the opposite side of the fulcrum to keep the lever from falling over. This constant muscle contraction with more effort creates muscle fatigue and myofascial pain syndromes.

Rene Cailliet, MD, nicely explains these concepts in his 1996 book Soft Tissue Pain and Disability (6). Pertaining to the loss of cervical lordosis causing a forward head posture, Dr. Cailliet notes that a 10 lb. head with a displaced center of gravity forward by 3 inches would required counter balancing muscle contraction on the opposite side of the fulcrum (the vertebrae) by 30 lbs. (10 lbs. X 3 inches): 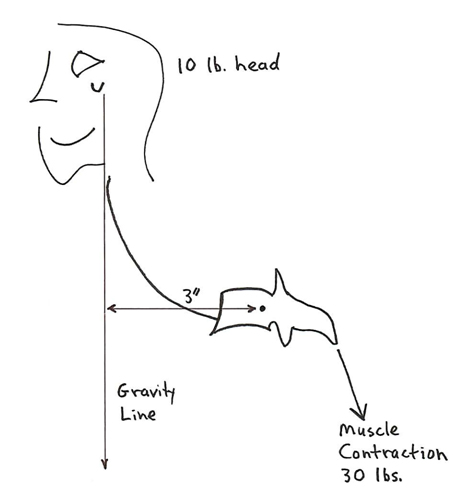 The constant muscle contraction required to keep the head upright when the patient has a loss of cervical lordosis creates muscle fatigue and myofascial pain syndromes (6).

Additionally, the loss of cervical lordosis creates constant, significant increased loads on the fulcrum tissues (discs and facet joints). The consequence of this is accelerated articular deterioration, degenerative joint disease and spondylosis (1, 7, 8, 9).

Beginning in the 1960s, Swedish neurosurgeon Alf Breig, MD, began to document that loss of cervical lordosis (he referred to it as cervical anteflexion), could compromise the vascular integrity of the spinal cord as a consequence of abnormal spinal cord stretching, or tethering (10, 11). Today (9/6/2016) a search of the US National Library of Medicine using the key words “spinal cord tethering” in PubMed located 28,269 citations. Dr. Breig and others note that restoration of cervical spine lordosis immediately results in improved spinal cord blood flow (10, 11, 12). It is suggested that spinal cord tethering and consequent spinal cord ischemia might be a factor in demyelinating disease (12).

A number of researchers have documented that long-standing loss of cervical lordosis, if uncorrected, will lead to cervical spinal cord myelopathy (9, 13, 14, 15, 16). These researchers suggest that the myelopathic findings may be due to vascular compromise (primarily from the anterior spinal artery) or secondary to direct and prolonged pressure on spinal cord neurons.

Regardless of the precise causative mechanism, cervical spinal cord myelopathy secondary to loss of cervical lordosis is a serious/debilitating problem that may have a simple solution for improvement (discussed below).

Earlier this year (2016), a unique study was published in the journal Medical Science Monitor, and titled (17):

Vertebral artery hemodynamics was measured in the supine position with the head rotated 45 degrees to the contralateral side. All measurements were repeated 3 times. The authors make these important points:

“The normal cervical spine has a lordotic curve. Abnormalities of this natural curvature, such as loss of cervical lordosis or cervical kyphosis, are associated with pain, disability, and poor health-related quality of life.”

The “natural lordotic curvature of the cervical spine is considered to be an ideal posture in terms of biomechanical principles.”

“Deviations from the natural curvature may originate from disrupted biomechanics, because axial load is shifted from posterior to anterior column as lordosis is lost, and the increased compressive forces trigger and accelerate the degenerative process.”

“The loss of cervical lordosis is associated with neck, upper thoracic, and shoulder pain, tension and cervicogenic headaches, and poorer health-related quality of life outcomes.”

In addition to bony structure changes in the cervical spine, when the “natural cervical curvature is disturbed, the normal distribution of neck muscle loads is also disrupted and a larger workload is placed on the supportive soft tissues across cervical segments to maintain biomechanical integrity.”

When the cervical curve flattens, the vertebral arteries “are also in danger of being stretched or compressed.”

“The means of diameter, flow volume, and peak systolic velocity in patients were significantly lower as compared to controls.”

The results of the study revealed that vertebral artery parameters were “significantly different between groups, with patients with loss of cervical lordosis showing lower values in comparison to controls.”

This review presents evidence linking loss of cervical lordosis to:

Most recently (August 30, 2016, Epub), Egyptian physical therapists Ibrahim Moustafa and Aliaa Diab collaborated with American chiropractor Deed Harrison. Their article was published in the European Journal of Physical and Rehabilitation Medicine, and titled (28):

“Appropriate physical therapy rehabilitation for cervicogenic dizziness should include structural rehabilitation of the cervical spine (lordosis and head posture correction), as it might to lead greater and longer lasting improved function.”

Chiropractors can be the most important health care provider in dealing with the loss of the cervical lordosis issue. They can quantify the problem radiographically; they can ergonomically and habitually coach the patient towards better postural habits; they can improve cervical lordosis with a variety of clinical approaches and home care advice.