When a force is applied to a joint, increased motion and “joint separation” occur. This can be done without causing any injury to the joint tissues (bones, cartilage, ligaments, muscles, tendons, nerves, etc.). This increased motion has a number of proposed benefits, including (1):

The classic joint cavitation process was initially described by Sandoz in 1976 (2). In this initial publication, Sandoz categorizes joint motion into three categories:

This model of joint cavitation is supported by others (1, 3), and is explained as follows:

There are three categories of joint motion:

This is the motion that occurs as a consequence of performing exercise.

This is the motion that occurs as a consequence of stretching and/or through mobilization techniques.

“Beyond the end of the active range of motion of any synovial joint, there is a small buffer zone of passive mobility.” A joint can only move into this zone with passive assistance, and going into this passive range of motion “constitutes mobilization.” [not manipulation.]

“At the end of the passive range of motion, an elastic barrier of resistance is encountered.”

“If the separation of the articular surfaces is forced beyond this elastic barrier, the joint surfaces suddenly move apart with a cracking noise.”

“This additional separation can only be achieved after cracking the joint and has been labeled the paraphysiological range of motion. This constitutes manipulation.”

“The cracking sound on entering the paraphysiological range of motion is the result of sudden liberation of synovial gases—a phenomenon known to physicists as cavitation.”

Following cavitation, a synovial bubble can be observed on x-rays, which is reabsorbed over the following 30 minutes.  During this “refractory period” there is no resistance between the passive and paraphysiological zones.

“At the end of the paraphysiological range of motion, the limit of anatomical integrity is encountered.  Movement beyond this limit results in damage to the capsular ligaments.”

Joint manipulation [adjusting] “requires precise positioning of the joint at the end of the passive range of motion and the proper degree of force to overcome joint coaptation” [to overcome the resistance of the joint surfaces in contact]. 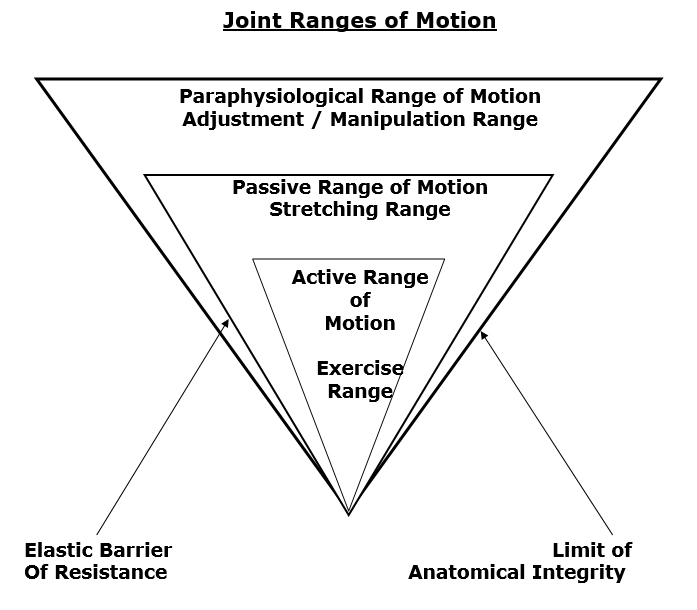 Physicians JB Roston and R Wheeler Haines from St. Thomas’s Hospital Medical School, London, UK, published the first study in the literature to investigate the cavitation of a joint leading to an audible “cracking” of the joint in 1947. It was published in the Journal Of Anatomy and titled (4):

Cracking in the Metacarpal-Phalangeal Joint

In this study, the subject’s middle digit was wrapped with adhesive plaster, and a stout string was tied tightly over this, around the proximal phalanx. The string was then attached to an immovable object through a tensiometer. A preliminary x-ray was taken. The subject was instructed to draw his hand away until the metacarpal-phalangeal (MC) joint “cracked”, and the tensiometer recorded the degree of traction. After “cracking,” while still under tension, a second x-ray was taken, and the degree of joint separation was measured.

When the “crack” occurred, an immediate and significant increase in joint separation also occurred, from 1-3 mm. (Picture after 1, 2, 5) 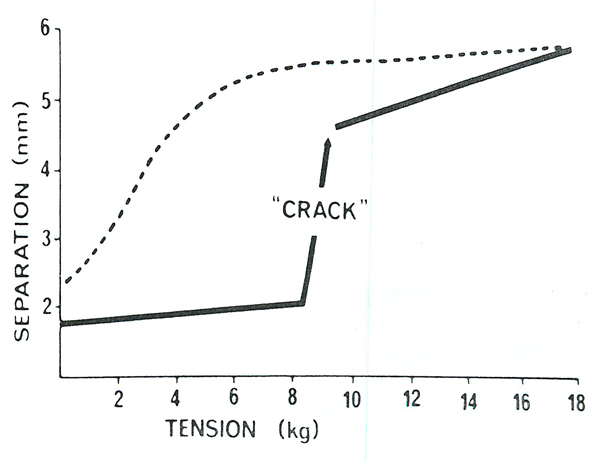 After the joint “cracks” and the increased joint separation is achieved, the increased separation can be repeated for the next 17-22 minutes without having to recavitate the joint. Further direct tension on the joint will not produce a second crack; the joint is in a “refractory phase.”

After about 20 minutes (17-22 minutes), the whole cycle of joint “cracking” can be repeated. “The minimum time recorded between two cracks produced by direct tension was 17 minutes, and never more than 22 minutes rest was required before a second crack could be produced.”

After “cracking” the joint, a tractional x-ray shows a gas shadow bubble in the joint. These authors suggest that the refractory phase after cracking corresponds to the time required for the gas bubble to pass back into solution.

These authors found that some joints were difficult (or impossible) to cavitate (“crack”). They propose that the explanation for this “is inability to relax the muscles whose tendons pass across the joint.” This has clinically practical importance.

Decades later, a second, more detailed study investigating the joint cavitation and “cracking” phenomenon appeared in the Annals of Rheumatic Diseases in 1971. The investigators were from the Bioengineering Group for the study of Human Joints, at the University of Leeds in the United Kingdom. Their study is titled (5):

The authors used a similar investigational approach as the prior study (Roston/Haines, 4) on 17 test subjects. Interestingly, on 5 of their test subjects they were not able to cavitate their joints because they could “not relax sufficiently to allow a test to be performed properly.” In agreement with the prior study (4), increased muscle tension appears to impair the ability of a joint to cavitate and “crack.”

These authors largely agree with the finding of Roston/Haines (4) above. With increased joint traction, they state:

“The joint separation increases at a high rate, allowing the net flow of fluid into the low pressure regions. This results in collapse of the vapor phase of the cavities with consequent energy release as noise (the ‘crack’ heard externally).”

The gas removed during the period of low pressure “does not   reabsorb for 20 to 30 minutes.”

“This gas is readily visible on the radiograph, but is not responsible for causing the crack; it is there as a consequence of the cracking phenomenon.”

“The results support the view that ‘cavitation’ is responsible for the phenomenon of cracking.”

These authors extracted the post-cavitation gas bubble and analyzed it. They found it to be composed of carbon dioxide.

The most recent study investigating joint cavitation and “cracking” was published April 15, 2015, in the journal Public Library of Science One (PLOS ONE). Gregory N. Kawchuk from the Department of Physical Therapy, Faculty of Rehabilitation Medicine, University of Alberta, CAN, and colleagues titled their study (6):

This cine-MRI study, in agreement with prior x-ray studies, showed that joint cracking following joint distraction followed this sequence of events:

The evidence shows that the mechanism of joint cracking is related to cavity (gas shadow) formation. These authors make the following observations:

“Cracking” sounds require time to pass before they can be repeated despite ongoing joint motion. This is called the refractory period.

“A light distraction force will barely separate the joint surfaces. With a greater distraction force, the surfaces resist separation until a critical point after which they separate rapidly. It is during this rapid separation phase that the characteristic cracking sound is produced. Following cracking, the joint is in a refractory phase where no further cracking can occur until time has passed (approximately 20 minutes).”

“Cine-MRI demonstrated minimal joint surface separation in the resting phase prior to joint cracking followed by rapid joint separation during the crack itself.”

These authors also observed that joint separation with cavity formation does not occur at the same traction force in each finger. This implies that some joints are easier and some joints are harder to cavitate. Other research, noted above, attribute this to tension of the muscles that cross a particular joint that one is attempting to cavitate.

These authors end their study by stating: “Habitual knuckle cracking has not been shown to increase joint degeneration.”

Several studies have investigated as to whether habitual joint cracking is harmful to the cavitated joint, especially with respect to the incidence of degenerative joint disease (osteoarthritis). In 1975, researchers for the Departments of Medicine and Rehabilitation Medicine at the University of Southern California School of Medicine in Los Angeles, CA, published a study in the Western Journal of Medicine, titled (7):

The Consequences of Habitual Knuckle Cracking

The authors note that habitual knuckle cracking has been considered to be a cause of arthritis. Knuckle cracking appears to cause some comfort or satisfaction to the person doing it; however, it has been claimed, “arthritis would be an inevitable outcome.” As a consequence, many children with this habit are chided to stop cracking their knuckles lest arthritis or enlarged knuckles or both develop.

Knuckle cracking appears to be a habit that begins in childhood and persists into adult life.

In this study, 28 (average age 78.5 years) patients were examined clinically and by x-ray; 15 were habitual knuckle crackers and 13 were not (controls).

“metacarpal-phalangeal degenerative joint disease is not a consequence of knuckle cracking.”

These authors also made these comments:

This survey of a “geriatric patient population with a history of knuckle cracking failed to show a correlation between knuckle cracking and degenerative changes of the metacarpal phalangeal joints.”

“The data fail to support evidence that knuckle cracking leads to degenerative changes in the metacarpal phalangeal joints in old age.”

“The chief morbid consequence of knuckle cracking would appear to be its annoying effect on the observer.”

This study concludes that habitual knuckle cracking does not increase the incidence of cracked knuckle osteoarthritis. However, in reviewing the data, their findings could have been interpreted differently:

An alternative interpretation could be that habitual knuckle cracking significantly reduces the incidence of knuckle degenerative joint disease. Mathematically, it is an 82% reduction.

A more recent investigation of knuckle cracking and osteoarthritis was published in the journal American Board of Family Medicine in 2011 by military physicians Kevin deWeber,  Mariusz Olszewski, and Rebecca Ortolano. Their article is titled (8):

These physicians note that the characteristics of hand osteoarthritis include:

“Given this burden of suffering from hand osteoarthritis and the lack of curative or disease-modifying treatments, factors that potentially protect against osteoarthritis warrant further investigation. One such factor is knuckle cracking.”

Knuckle cracking is a behavior that involves manipulation of the finger joints that results in an audible crack, and it is often done habitually. It is estimated that 25% to 54% of people habitually crack their knuckles:

This study assessed 215 individuals; 135 with osteoarthritis, and 80 controls. Their mean age was 62 years (50 to 89 years). Twenty percent habitually cracked their knuckles. Participant’s hands were assessed radiographically.

Study subjects quantified the frequency of their daily knuckle cracking:

Study participants described how frequently each day they crack each knuckle and for how many years they have been doing it. This was the first study to correlate the duration and the total volume of previous knuckle cracking with osteoarthritis.

The mechanics of knuckle cracking was described as follows:

“During an attempt to crack a knuckle, the joint is manipulated by axial distraction, hyperflexion, hyperextension, or lateral deviation. This lengthens part or all of the joint space and greatly decreases intra-articular pressure, causing gases that have dissolved in the synovial fluid to form microscopic bubbles, which coalesce. When the joint space reaches its maximum distraction (up to 3 times its resting joint space distance), joint fluid rushes into the areas of negative pressure. The larger bubbles suddenly collapse into numerous microscopic bubbles, leading to the characteristic cracking sound. The maneuver leaves the joint space wider than it had been and synovial fluid more widely distributed. The stretching of joint ligaments required to produce the widened joint space also leaves the joint with greater range of motion. It typically takes at least 15 minutes for the joint to be able to be cracked again because of the time required for the microscopic bubbles to fully dissolve into solution and for the joint space to retract back to its resting position.”

These authors conclude, “a history of habitual knuckle cracking—including the total duration and total cumulative exposure to knuckle cracking—does not seem to be a risk factor for hand osteoarthritis.”

These authors note that some people crack their knuckles because of the sense of relief it can bring, some do so because of habit, and some for both reasons. After knuckle cracking, there is an “immediate joint tension release and increased joint range of motion.” A “common urban legend suggests that knuckle cracking will lead to arthritis of the hand joints,” but this is not “supported in the medical literature.”

There appears to be no controversy that joint cavitation improves joint range of motion and reduces articular symptomatology.