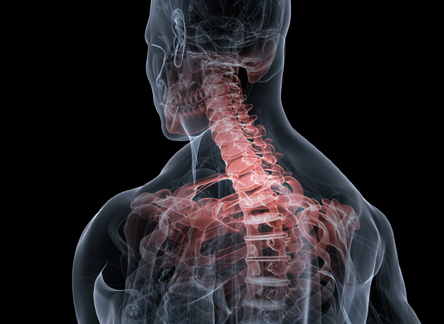 Whiplash injuries have been extensively studied and researched. There are literally thousands of medical and scientific studies describing every aspect of whiplash injury.

It has been firmly established for nearly two decades that the primary whiplash injury is an inertial injury to the soft tissues (ligaments and muscles) of the facet joints and disc joint of the neck. (Pain, 1993)

With rare exception, when we need a cavity filled in a tooth, the nerve to the tooth is rendered pain free with an injection of an anesthetic. Anesthesia stops the pain signal from reaching the brain.

For decades, whiplash researchers have been determining the tissue sources of whiplash injury pain, especially for chronic whiplash injury pain. The researchers inject anesthesia into various tissues of the neck to see where the pain is coming from. They can precisely position the anesthetic needle into the exact tissue for assessment by using a motion x-ray machine, called a fluoroscope. When the injection stops the patient’s pain, they know that tissue was responsible for the pain. This protocol has been used to anesthetize the disc joint, the facet joints, the spinal muscles, the spinal nerves, and more, using conscious live patients suffering from chronic whiplash injury pain.

Interestingly, the primary tissue source for chronic whiplash injury headache was the ligaments of the facet joints of the upper part of the neck.