Why Do Chiropractors
Advise/Insist on X-Rays?

Much of chiropractic education is centered around x-rays (radiology). Typical chiropractic curriculum has between 6-10 courses that are wholly dedicated to radiology. Additionally, radiology is woven into the majority of clinical science and technique courses. Consequently, leading scientific/medical journals have confirmed the competency of chiropractors in reading/interpreting spinal x-rays (2, 3, 4).

As an example, in 2002, an important study was published in the journal Spine, titled (4):

The authors were from the Department of Radiology, Medical Center Alkmaar, Alkmaar, The Netherlands. Their objective was to determine and compare the reliability and validity of contraindications to chiropractic treatment (infections, malignancies, inflammatory spondylitis, spondylolysis and spondylolisthesis) detected by chiropractors, chiropractic radiologists, and medical radiologists on plain lumbosacral radiographs.

The participants of the study read a set of 300 blinded lumbosacral (lower back) radiographs, 50 of which showed an abnormality. The results were expressed in terms of reliability and validity.

The results were such that the authors concluded that the small differences between the groups were of “little clinical relevance.” The authors stated:

“All the professional groups could adequately detect contraindications to chiropractic treatment on radiographs. For this indication, there is no reason to restrict interpretation of radiographs to medical radiologists. Good professional relationships between the professions are recommended to facilitate interprofessional consultation in case of doubt by the chiropractors.”

An important inclusion in this study was that x-rays were used to determine contraindications to chiropractic care, including the presence of infections, malignancies, inflammatory spondylitis, spondylolysis, and spondylolisthesis

Why is Radiology so Emphasized in Chiropractic Education?

Chiropractic educational and practice standards mandate that a chiropractic evaluation determine if the patient’s primary complaint and clinical status are of the type that respond to chiropractic care, or if the patient should be referred out for additional diagnostic procedures or to a different health care provider. Chiropractic education, training, and licensure allow the public to directly access chiropractic services without requiring a referral from another health care provider. As such, the chiropractor will take a history and evaluate the patient to establish a working diagnosis (identification of the “leading contender” nature and cause of a certain phenomenon).

A relevant study was published in 1997 in the Journal of Manipulative and Physiological Therapeutics, titled (5):

Chiropractic Radiologists:
A Survey of Chiropractors’ Attitudes and Patterns of Use

The objective of this study was to assess the chiropractic use of radiography, referral patterns to both medical and chiropractic radiologists and attitudes toward radiologists by practicing U.S. chiropractors. The findings included:

The working diagnosis is the treating doctor’s best “guess” as to the root cause/causes of the patient’s symptoms and signs. As additional information is obtained, the diagnosis will often change or be confirmed.

As noted from the list above, the majority of these complicating factors are determined by viewing x-rays. These factors are not determinable without x-rays or other more advanced imaging modalities (CT, MRI, etc.).

Is the Ionizing Radiation Exposure
From Medical/Dental/Chiropractic X-Rays Harmful?

A Catalog of Risks

The authors presented an analysis of loss of life expectancy attributed to a number of risk factors. They note that the risks of radiation are especially emphasized in the popular press, yet they note that the public does not understand risk. The public gets very excited about radiation risks, which are almost never fatal, whereas it largely ignores other risks, which claim thousands of lives every year. An analogy would be the irony of a smoker declining medical x-rays to avoid excess radiation risks. The authors note that both men and women should expect a loss of about 1 month of life loss for each pound they are overweight, a risk that far surpasses the risks associated with exposure to medical x-rays. Their risk analysis includes: 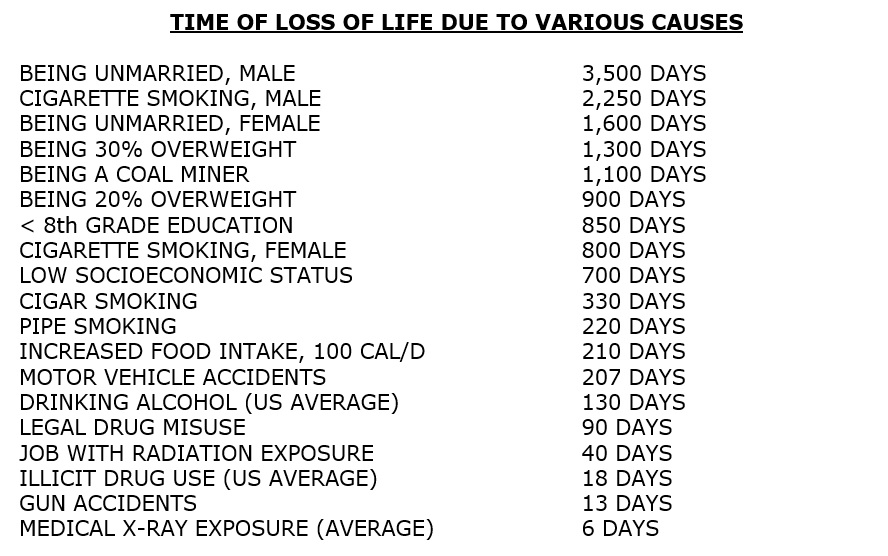 These authors conclude that to increase life expectancy, the priorities should be:

In a parallel argument, studies began pointing out that exposure to low dose radiation, including from medical imaging, would activate within the body a series of protective responses, including the activation of the endogenous anti-oxidant array. Ironically, this up-regulation of protectors would not only neutralize damage caused by the radiation exposure, but would also neutralize damage that was caused by other non-radiation sources. In other words, exposure to low levels of medical radiation could actually be helpful to the body and for health (8, 9, 10, 11, 12, 13, 14, 15, 16, 17, 18). [This is a minor fraction of the published studies on this topic. A literature search of the National Library of Medicine using PubMed with the terms “radiation hormesis” locates 363 articles: July 7, 2018].

A central theme from these studies is that the authors are unyielding in their support for the understanding that high doses of radiation exposure are damaging and harmful. They are equally unyielding and insistent in the science that shows that low-dose radiation, including that from medical x-rays is not harmful and may also be beneficial. This concept is called hormesis.

Hormesis is a phenomenon of dose-response relationships in which something that produces harmful biological effects at moderate to high doses may produce beneficial effects at low doses. Hormesis indicates a favorable biological response to low exposures of chemicals or other stressors, but an opposite harmful effect in large doses.

Hormesis was nicely explained in the July 2015 Scientific American by Mark Mattson, PhD (17). Dr. Mark Mattson has a PhD in biology. He is Chief of the Laboratory of Neurosciences at the National Institute on Aging, and Professor of Neuroscience at Johns Hopkins University. He is Editor-in-Chief of Ageing Research Reviews and NeuroMolecular Medicine, a Section Editor for Neurobiology of Aging, and an Associate Editor for Trends in Neurosciences.

In this article, Dr. Mattson states:

“Hormesis is a term used by toxicologists to refer to a biphasic dose response to an environmental agent characterized by a low dose stimulation or beneficial effect and a high dose inhibitory or toxic effect.”

“Thus, a short working definition of hormesis is: a process in which exposure to a low dose of a chemical agent or environmental factor that is damaging at higher doses induces an adaptive beneficial effect on the cell or organism.”

Dr. Mattson continues to explain why hormesis is a fundamental concept in evolutionary biology. He notes, “thousands of published articles include data showing biphasic responses of cells or organisms to chemicals or changing environmental conditions.” He emphasizes that hormesis is also implicated in the actions of a number of complementary and alternative health care disciplines. 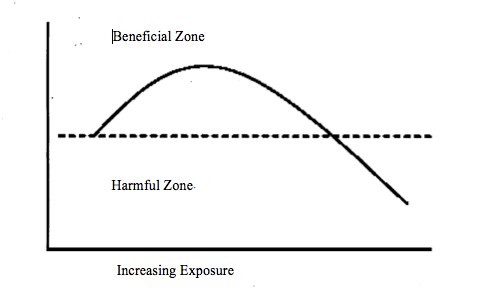 The disagreements in the peer reviewed literature pertaining to medical radiation exposure is so contentious that authors and publications have accused the initiators and perpetuators of the linear no-threshold dose-response to ionizing radiation perspective of “scientific misconduct.” (18)

An important article on this subject was published by authors from Nuclear Physics Enterprises (Marlton, New Jersey) and the Food and Drug Administration (retired), in 2017. The Article was published in the Journal of Nuclear Medicine and titled (19):

A non sequitur is Latin for “it does not follow.” It means “an invalid argument,” or a conclusion that is “fallacious.”

The linear no-threshold hypothesis (LNTH) has been applied to low-dose ionizing radiation for more than 70 years but lacks a valid scientific foundation. Yet, “this hypothesis is the orthodox foundation of radiation protection science, in turn forming the basis of regulations and public policy.” The authors further state:

“Radiologic imaging is claimed to carry an iatrogenic risk of cancer, based on an uninformed commitment to the 70-y-old linear no-threshold hypothesis (LNTH).”

“Credible evidence of imaging-related low-dose carcinogenic risk is nonexistent; it is a hypothetical risk derived from the demonstrably false LNTH.”

“The low-dose radiation of medical imaging has no documented pathway to harm.”

The author’s primary criticism of the linear no-threshold hypothesis of low-dose radiation exposure is that its proponents purposefully ignore the theory’s “fatal flaw.” This flaw is that the proponents focus only on molecular damage while ignoring protective, organismal biologic responses. Earth’s life forms have developed adaptive, biologic repair and/or removal responses to radiation damage. Low doses of radiation stimulate these biological protective responses. Yet, high doses of radiation exposure overwhelm and inhibit such protection mechanisms. The authors state:

“The primary LNTH fallacy is it excludes this evolutionary biology, ignoring the body’s differing responses to high versus low radiation doses.”

“Low doses [of radiation] stimulate repair or removal of radiogenic damage in excess of that immediate damage, they provide enhanced protections against additional damage over time, including damage from subsequent higher radiation exposures.”

The authors conclude that low-dose radiation exposure does not cause, but more likely helps prevent, cancer. There is an unwarranted fear of low-dose radiation. The contemporary attitude towards health care x-ray exposure has resulted in unjustified “radiophobia,” a perspective that is misplaced, wrong, and non-scientific. The authors make a strong argument why such x-ray exposures should not be avoided based upon fear of radiation.

A study applicable to chiropractic clinical practice on this topic appeared earlier this year (2018). It was published in the journal Dose-Response, and titled (20):

The authors argue for the value of spinal x-rays for determining and measuring both postural and segmental mechanical abnormalities. They also argue that spinal x-rays improve diagnosis and reduce inappropriate treatment.

Additional benefits of spinal x-rays are that they can image both cautionary and absolute contraindications to manual therapy. Their cautionary list includes:

The authors cite references to support that the radiation dose employed for plain spinal x-rays radiograph is very low, about 100 times below the documented threshold dose for harmful effects. Hence, medical, dental, chiropractic x-rays must be considered to be safe.

The authors point out the primary influence of x-ray exposure is the genesis of reactive oxygen species (ROS) that have the ability to exert a damaging influence on cellular DNA. However, the quantity of ROS produced by x-rays is minor compared to the very large quantity of ROS that is constantly produced by aerobic metabolism (breathing air). This makes x-ray generated ROS quantity negligible to human health.

Also, all organisms, including humans, have evolved powerful protective mechanisms that prevent, repair, or remove damage in and to cells caused by ROS. Excessively damaged/cancerous cells may be destroyed by immune system mechanisms, preventing the growth and spread of cancerous cells.

The levels of ROS produced by low-dose x-rays sends signals to upregulate many of the biological protection systems against aerobic ROS, other toxins, pathogens, and all damage events. This stimulation produces a range of beneficial effects, including a lower risk of cancer. The authors state:

“Since low doses of radiation stimulate many protective systems, including the immune system, it is very unlikely that low-level radiation causes more damage than benefit.” [underline and italic added]

“Rather than increasing risk, such exposures would likely stimulate the patient’s own protection systems and result in beneficial health effects.”

“A radiograph may in fact stimulate our protective systems, which is a beneficial health effect.”

These authors argue that clinical practice guidelines should be updated and abandon unfounded bias against patient exposure to spinal x-rays.

There are many benefits for both the chiropractor and patient to having spinal x-rays to assist in the analysis, diagnosis, and treatment of spinal syndromes.